This article was published in the October 1974 edition of Celsius. The author is unknown. 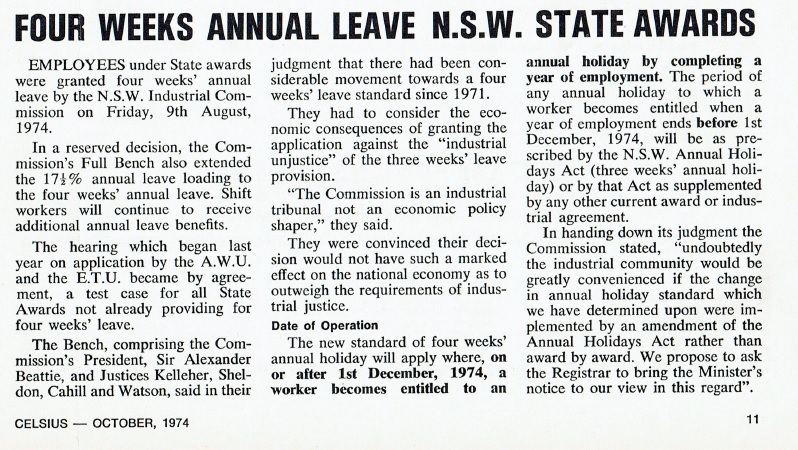 The hearing which began last year on application by the AWU and the ETU became by agreement, a test case for all State Awards not already providing for four weeks’ leave.

The Bench, comprising the Commission’s President, Sir Alexander Beattie and Justices Kelleher, Sheldon, Cahill and Watson, said in their judgment that there had been considerable movement towards a four weeks’ leave standard since 1971.

They had to consider the economic consequences of granting the application against the “industrial unjustice” of three weeks’ leave provision.

“The Commission is an industrial tribunal not an economic policy shaper,” they said.

They were convinced their decision would not have such a marked effect on the national economy as to outweigh the requirements of industrial justice.

In handing down its judgment the Commission stated, “undoubtedly the industrial community would be greatly convenienced if the change in annual holiday standard which we have determined upon were implemented by an amendment of the Annual Holidays Act rather than award by award. We propose to ask the Registrar to bring the Minister’s notice to our view in this regard”.