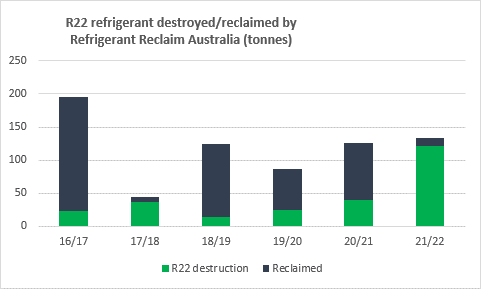 by setting a new record for destroying ozone depleting refrigerant gases and removing them permanently from the ecosystem.

In the last financial year the industry destroyed more than three times as much R22, one of the most common ozone-depleting refrigerant gases, as in any of the previous five years.

More than 120 tonnes of R22 were recovered in 2020-21 and sent for destruction at the Refrigerant Reclaim Australia (RRA) plasma arc facility in Melbourne – the largest amount since it began to be reclaimed for re-use a decade ago.

By contrast, destruction rates of R22 in the previous five years ranged from 14 to 39 tonnes.

The record rate of R22 destruction is a milestone in the permanent removal of ozone-depleting gases by the 124,000 refrigeration technicians licensed by the Australian Refrigeration Council (ARC).

ARC chief executive officer Glenn Evans said the record was a testament to the efforts of the entire RAC industry and to the legislation and regulations that underpin the licensing scheme.

“This record coincides with the 35th anniversary of the Montreal Protocol on Substances that Deplete the Ozone Layer – a great achievement built on long years of dedicated effort,” he said.

“Australia enshrined the principles of the Montreal Protocol in legislation with the Ozone Protection and Synthetic Greenhouse Gas Management Act 1989 – one of the first countries to do so.

“The first targets to protect the ozone layer were the chlorofluorocarbons (CFCs) used in everything from aerosol cans to fridges and air conditioners, which were banned in 1996.

“After that, the RAC industry’s focus moved on to eliminating hydrochlorofluorocarbons (HCFCs) such as R22, and here we are today, closer than ever to that objective.”

This story and image was provided courtesy of Greg Shoemark from the Australian Refrigeration Council and was edited slightly prior to publication. Image via Pixabay.