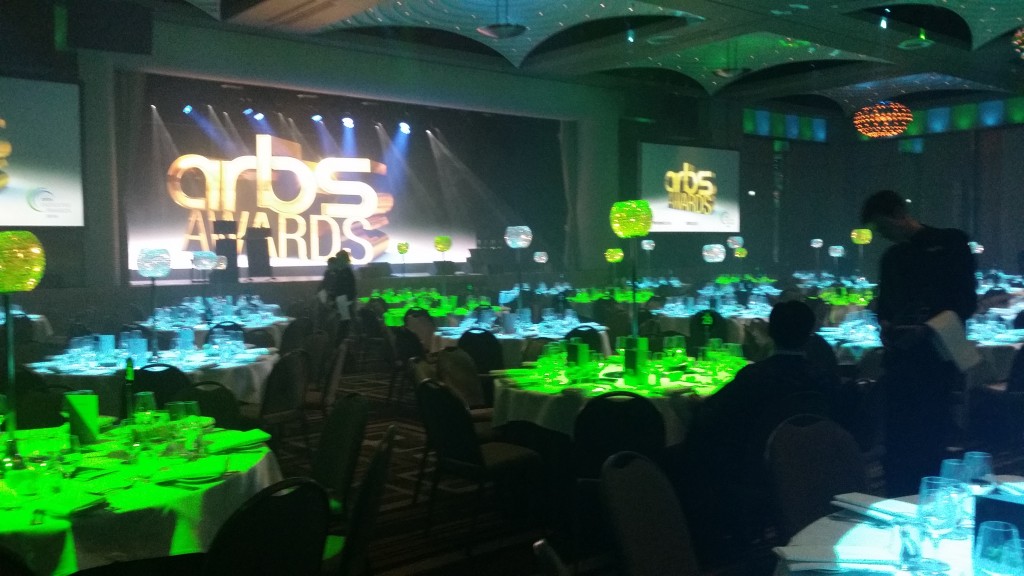 Hopkins also spoke in-depth about the newly established ARBS Foundation, which he stated was “little more than a concept” at ARBS 2014.

“The Foundation is now up and running and we have established a scholarship as well as a research and development fund. The first five beneficiaries for the scholarship fund have been identified.”

Hopkins also encouraged everyone to help identify initiatives for support through the research and development fund.

Comedian, Shane Jacobson, was as funny as ever as MC, simultaneously providing the room with endless laughs and praising the Awards’ finalists and winners.

The first Award to be presented was the ARBS Outstanding Industry Education/Training Award, which recognises outstanding contributions to training, education and leadership within the Air Conditioning, Refrigeration and Building Services Industry. The winner of the ARBS Outstanding Industry Education/Training Award was Sydney TAFE for its Diploma of Engineering Technology in Refrigeration and Air Conditioning.

The next Award to be presented was the ARBS Product/Service Excellence Award which recognises new technologies or re-application of existing technologies that demonstrate innovation and fitness for purposes for the Air Conditioning, Refrigeration and Building Services sector. The winner of the ARBS Product/Service Excellence Award was Seeley International for its Braemar 7 Star Equivalent Ducted Gas Heater.

Last but certainly not least, three industry veterans were inducted into the 2016 ARBS Hall of Fame. The ARBS Hall of Fame is the highest accolade, recognising outstanding service, contribution, commitment, stewardship and leadership to the Air Conditioning, Refrigeration and Building Services Industry. The nominations were open to individuals with a well-documented performance record of working tirelessly to further the industry. The three inductees certainly didn’t fall short on their part.

Neil Marshall, nominated by AMCA, was recognised for his contribution to the industry through his successful business which has been running for over 30 years, as well as his contributions through associations. The ARBS website states that he was State and National President of AMCA, Chairman of both the Construction Industry Engineering Services Group and the Australian Construction Industry Forum and he was the first non-American to serve as Chairman of the National Environmental Balancing Bureau (NEBB).

Dr Stephen White, nominated by AIRAH, was recognised for his 20 plus years of research in energy end use efficiency and electricity industry demand side management, as well as for his authority on solar air conditioning. Dr White’s other contributions to the industry include but are not limited to: his work and awards with AIRAH, as well as his contribution on national and international councils and boards.

Garry Mundy, nominated by AREMA, was recognised for his contribution in the industry through founding ActronAir in 1984, as well as his support for industry students and for the career of his staff.

The acceptance speech by the winners emphasised the importance of the Awards with all of the winners humbled by their wins, thanking their staff and teams and even trying to sell their products which Frank Seeley managed with great gusto (and why not his product had literally just won the award). The Hall of Fame inductees’ modest speeches showed why they entered and greatly contributed to the industry—to make a difference.

Overall everyone enjoyed their night with praise definitely given where it was due. Congratulations to all of the ARBS Industry Awards winners!